It’s no secret that I love Science Fiction, and more specifically Star Trek.  Rewatching an old episode recently reminded me of the typical formula for the introduction of the impending episode, which typically starts with a character “speaking” their personal or officer’s log into the main computer.  In the world of television this is just an interesting way to open the narrative, but moreover, it shows that the concept of blogging predates the mainstream Internet.

I love my blog. I admit that blogging (which, lets be honest is just a technological equivalent to a diary) is something I initially resisted, but after a time, I began to really enjoy communicating into the nether.   My only regret is that I didnt start earlier.  I wish I had archives reaching back into my teenage years – what an amazing insight of growth that would be.  Blogging can help act as a cathexis for our lives, a place to bleed away energy and thoughts without judgment.  It helps me archive and coordinate my thoughts, as well as acting as a effigy for one’s personal brand and acting as a version control system for your life – capturing snippets of thoughts and feelings over time for prostherity.

I wished I had started blogging a long time ago. Ideally, 1992 when things became so bad between my step-dad at the time that I was forced to move in with my Dad is when I wished I started.  It wasn’t a great time, but that doesn’t mean archiving it wouldn’t have been positive. I remember the technical details of the events, but none of the intricate feelings. I just hold onto the negative energy because I’m honestly not sure what to do with it. Unable to work through it because I left the healing for too long. If only I’d written it down I’d have the clarity of the time, and the wisdom of age to temper it. I wished I had started blogging a long time ago…

I recently down-scaled the server which hosts this blog (one among a few). Being a Ubuntu server, it was trivial to install the LAMP stack, including Apache 2. However, I quickly discovered a problem with the default configuration on a server with a lesser amount of memory (in this case 512MB). The server would work just fine for a short while and then grind to a near halt, where even a SSH session becomes unusable. When I eventually got into the server, I listed the processes and found the ‘apache2’ process running several dozen times!

The default configuration for the Pre-fork MBM (Multi-Processing Module) reads as follows:

To something more reasonable to a server with limited memory, such as:

I found this has made my server much more stable – and I’ve not noticed any performance decrease from the new configuration.

Today Apple is engaging in similar [legal] tactics against a number of bloggers who simply reported on the fact that someone created a skin for Windows Mobile phones that looks exactly like the new iPhone user interface […] If Apple wants to go after the guy that made the Windows Mobile skin that looks like the iPhone, fine. But to bully bloggers who are simply reporting on this is another matter.Now, at the risk of dragging Touchstone into a cease and desist land mine, obvious bullying tactics like this are simply ridiculous. It’s not the first time Apple has been so aggresive with the community. There was the Apple Rumor mill Wars, the more recent demanding that YouTube videos be removed from sites and various issues with the use of the iPod brand. Can I even say Podcast now?

This is the latest in a long line of over-the-top legal war-mongering. Apple has earned a lot of respect and loyalty from it’s fan and not only does this irritate me, it may well kill one of their key stratigic advantages by acting this way.

Which is why I posting it here.

My theory is that if a company is going to actively and aggressively try to stop the blogosphere (which is largely only opinion anyway) then I will add to the news. What are they going to do if several million people post about it? Sue everyone? I don’t think so.

So here it is! 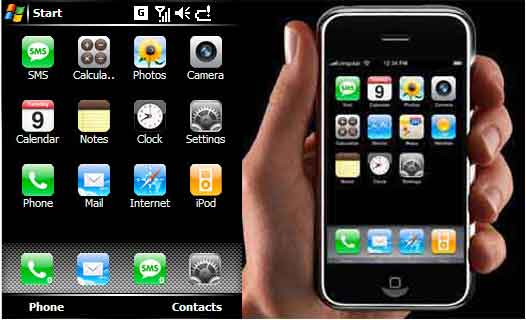 You can’t stop the signal.

As many of you are probably aware, the Touchstone Team are avid Firefly fans. I was recently reading my feeds (from gateworld.net incidentally) and noticed that Jewel Staite has a blog! Yay I thought, now THATS something I have to read.

It took several minutes for Chris to calm me down, obviously, this was very uncool. Even now, I am still confused as to how and why an excellent actor like Jewel could have a website which a) looks worse then a teenage girls MySpace page and b) doesn’t have an RSS feed. 5 minutes and I would have a blogger blog publishing to her website looking smick, easy to update and feeds for all to burn.

Bah. I almost wished I’d never found the site in the first place.

I know this isn’t really anything to get excited about, but I have to say that I’m really excited about us getting ranked 1 and 2 on Google. I think I really want to get ranked 1 for “rss gadget” but I guess we have to start somewhere.

BTW, TouchStone pre Alpha is running at the moment with Chris’ FeedDemon OPML file and “The Office – Email Scandal…” – apparently. 😉

I also had an argument with a person I work closely with (in the real world – as opposed to the ‘TouchStone’ world I seem to have found myself in recently) about the intrinsic value of blogs and other personalised content on the web. They were claiming that blogging is just as bad as the old days of the internet when every second person had a dodgy website made from Word saying “Under Construction” or “this is my website and i have 2 cats and a dog“.

I disagree with this. Passionately! I argued the virtues of blogging and RSS. Blogging is the long tail of publishing. And on the internet, nothing is as important as the long tail. If you think something – and write it down – then the odds are other people in the world feel the same way. It’s a way for us to connect to other people we otherwise never would/could.