Amnesia: The Dark Descent (2010) is a game unlike any other. It’s so different that the game even starts with a disclaimer, warning the gamer that it is an atypical game and is about immersion, not about ‘winning’. Therefore, this is a game that is entirely and utterly focused on the gamer’s experience. It for this reason that I’ve chosen to review this game in a ‘new journalism’ style – since failure to do so would fail to adequately express the single biggest success of the game, the suspension of reality. As Gillen (2004) says “What a gamer feels and thinks as this alien construct takes over all their sensory inputs is what’s interesting here, not just the mechanics of how it got there”. This is completely true of Amnesia: The Dark Descent since it sacrifices traditional game mechanics and instead relies almost exclusively on the gamer’s suspension of disbelief in order to invoke emotion and provide heavily scripted sensory experiences for the gamer. You simply cannot adequately describe this game to others without describing your personal experiences of this fantastical reality. 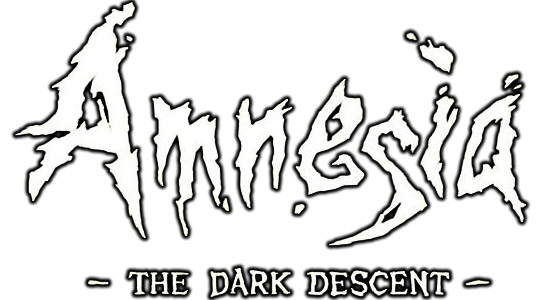 I love the horror genre. So it’s probably no surprise that I took to the indie developer Frictional Games’ latest survival horror video game, Amnesia: The Dark Descent (2010) with eager anticipation. Two of my personal all-time favorite gaming moments is playing through ‘The Cradle’ in Ion Storm’s Thief 3: Deadly Shadows (2004) and playing through ‘The Mansion’ in Troika Games’ Vampire: The Masquerade – Bloodlines (2004). However, while these scary moments in gaming history were very immersive and frightening, they were only individual levels of a larger game. While I was hopeful, I was initially skeptical that a developer would be able to sustain that kind of intensity, fear and suspense over the duration of an entire video game. I was wrong.

The eight hours or so I spent playing this game, were probably the most frightening eight hours of my life. I say ‘eight or so’ very loosely because the reality was that I was usually only able to emotionally support playing this game in 1 or 2 hour blocks, before I was required to abandon the game for a time and change my pants. And the new panties probably had little flowers on them, because never before has a piece of fiction made me felt so much like a frightened little girl.

Amnesia: The Dark Descent puts the gamer inside the head of ‘Daniel’ a rather mysterious protagonist who unsurprisingly has suffered some kind of memory loss. After rather foolishly following a trail of blood (I generally make it a rule to avoid following trails of blood) you discover a note written by yourself telling you who you are, and that you apparently hate some guy called ‘Alexander’ and you must kill him. I was a little irritated that the note doesn’t explain why, but it was all the motivation I needed to hunt this guy down and take him out. What I soon discovered was that not only was something very dark going on in this mansion, but that I was involved in it (somehow) and that I wasn’t alone. It was clear that evil was afoot because opening drawers and cupboards often yielded loads of creepy stuff such as human remains and bondage and torture gear. Scattered around he place was remains of a journal that slowly reveals how you got tangled up in this mess in the first place. Eventually you discover that your role in this wasn’t entirely passive either. Oh, Awesome. 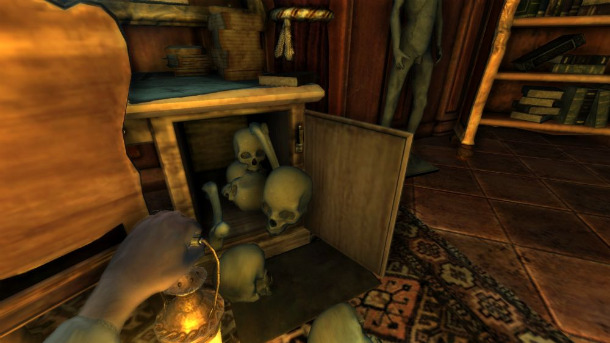 Just when I was starting to get used to discovering Alexander’s disturbing keepsakes, I heard an eerie sound behind me. I’d like to describe it for you but the truth is I only saw a kind of rapidly disappearing cloud of smoke. A few journal pages later describes a ‘shadow’ that’s apparently stalking me. Oh, Awesome.

Fortunately, the game was very kind to (on occasion) give me helpful hints along the way.

The problem is that it usually handed out these ‘captain hindsight’ hints after something had just mauled me to death.

As I solved the basic puzzles (which seemed to be more of a way to slow you down rather than try to make you think) it proceeded to get darker and darker, making Daniel go slowly insane. Sanity becomes important because the game is already creepy enough without the screen becoming blurry, the ground tilting beneath you, and imaginary bugs crawling over the screen. Fortunately you can increase the light levels by igniting candles and torches with tinderboxes you discover scattered about carelessly or by collecting oil (equally strewn about) for your lantern. However, I quickly realized that simply turning on all the lights is a mixed blessing. Sure you can get out of the darkness (which improves Daniel’s sanity) but it makes it far easier for the ‘others’ in the mansion to track you down. This is undesirable because a) they want to wear your head like a hat, and b) there is absolutely NO WAY for you to defend yourself. You end up trying to find a dark corner or a cupboard to hide in, which might keep you safe, but slowly sends you insane. Arhhh! So this is why I found myself spending long minutes huddled in a dark corner looking at the wall because I was simply too afraid to venture out. 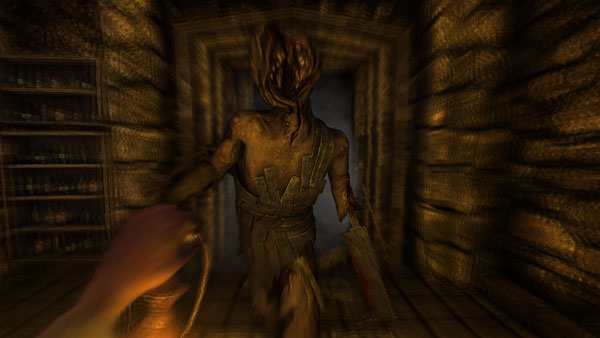 But the game doesn’t rely on overt scare tactics. It’s far smarter than that. In actuality, upon reflection I realized that the actual monster encounters are very few and far between, but this didn’t really occur to me while I was playing. It’s actually the ever changing atmosphere that keeps you on edge, making you fearful of EVERY little detail, even rooms you’ve already explored are scary, because the game changes little details here and there and I needed to keep asking myself: “Did that look like that before?” The constantly changing mansion isn’t just for show either. Occasionally the stone walls of the mansion start growing some kind of organic material, which will hurt you (like everything else) if you get too close to it or stand on it.’

For someone trying to maintain some resemblance of sanity, finding dead bodies around the place doesn’t help.

While playing the game, things get progressively worse. Since the developers had already established the key ‘rules’ of this reality, they slowly increase the severity of the pre-established atmosphere. More strange sounds, more darkness, more traps, and more monsters (usually whenever you least expect them). This builds to the games pièce de résistance – the final pages of Daniel’s journal, flashbacks (via screen or audio cues, or simply text on the screen) and the discovery of the torture chambers.

I cannot think of a game that makes a better and more sophisticated use of audio and visual cues than Amnesia: The Dark Descent. I really felt as though I was living in some kind of lucid nightmare. I soon forgot about the protagonists name (Daniel) because I really began to think it was me! While the ending was mildly disappointing, this game isn’t about the end-goal, it’s about the immersion and its string psychological thrills. I suspect the developers didn’t bother with the ending too much because they were trying to make a game that was so scary that few people would actually make it that far! I cannot count the number of times I literally covered my eyes with my hands, peeking though a split in my fingers, my stomach in knots as my mind tried to make sense of why I would choose to endure such a unrelenting nightmare.

My only criticisms would be that the puzzles do feel a little ‘in the way’, instead of being a part of the overall story, and that the game lacks the ‘big reveal’ that is alluded to throughout the game. The finale with Alexander, felt hurried and underwhelming as it felt disjointed from the rest of the game and the game just kind of ends, quite abruptly. For a game that’s almost entirely about timing, the ending felt like a missed opportunity. However, given that the game isn’t an exercise in how quickly you can get to the finale, this is easily forgiven.

This post is a slightly modified version of a piece I wrote for a University assignment for the RMIT  University Subject: Computer Games, reviewing a game of my choice in either a traditional or new-journalism style.