It’s always been frustrating to me that Ruby and Rails don’t really have strong templated standards on how to best document your code. There are several options available and it can all be very confusing and unclear.

There is one template I’ve found works best and its super simple:

While there are many other perfectly good documentation libraries this has the benefits of being simple to remember, very easy to read in code, and compiles out super nicely using 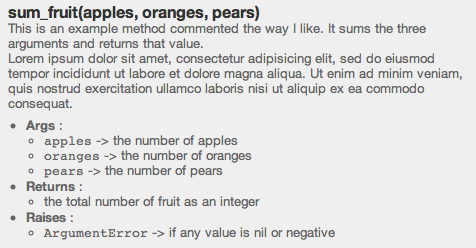 Other than this, I tend to try and follow the general conventions as outlined by the Rails contribution guidelines on commenting.

Recently I had quite a conundrum. I was working on a project’s model that was using the ActiveRecord save method update_columns to avoid executing the callbacks on the model, however had the unexpected side-effect further down my stack when a method in the chain checked if a particular attribute changed, wasn’t working because as well as skipping validations and callbacks; it also bypasses the ActiveModel::Dirty logic!

This caused me quite a problem, as I feared that I would be forced to use a method of saving the record that triggered my callbacks (very undesirable).

Fortunately, there is a solution.  Because the ActiveModel::Dirty class is still loaded, you can manually mark with attributes are dirty by simply calling [attr_name]_will_change! before the change to track the attribute.

It will work, despite using a method to save that doesn’t automatically track the dirty attributes for you.

Actually the ActiveModel::Dirty module has some pretty cool stuff in it. Much of it never gets properly explored in the average Rails project, but it provides some hidden magic, like being able to fully revert an object and undo a save, providing a kind of diff of changes and some other really neat stuff.

Today I found some magic.

An ActiveSupport module that provides an AMAZINGLY elegant alternative to the classic Ruby Benchmark class; which I had always considered to be a bit ‘clunky’.

ActiveSupport::Benchmarkable provides you a simple method ‘benchmark’ which you can pass a few options and block through and output the benchmark result to the log. Wrap this block around expensive operations or possible bottlenecks to get a time reading for the operation.

For example, let’s say you thought your data transformattion method was taking too long; you could wrap it in a benchmark block.

That would write something like “Processing some data (143.6ms)” to the log, which you can now use to monitor or compare speed over time (make sure its not getting worse as data size increases) or compared to alternate methods for optimisation.

The ActiveSupport::Benchmarkable docs also indicate that, you may give an optional logger level (:debug, :info, :warn, :error) as the :level option. The default logger level value is :info.

Finally, you can pass true as the third argument to silence all log activity (other than the timing information) from inside the block. This is great for boiling down a noisy block to just a single statement that produces one log line:

while these samples are indicative of what they would look like in a .html.erb file (view) – it also works in any other place you use the mix in.

I have personally used these to great success in controllers and models to help diagnose specific controller/model operations suspected to be slow.

This ActiveSupport module is an immensely powerful tool to have in a developers arsenal. I highly recommend it’s use.

Recently, I need to move some Rails projects I was working on to new computer and this needs me to install all the dependencies for these projects.  While using bundler to install the gems; I encountered the following error:

Anyone who has even the smallest amount of experience developing with Ruby on Rails knows that Rails has some pretty sweet configuration conventions which make switching between environments very easy. Switching from development to production to testing is as easy as changing the RAILS_ENV variable. No doubt Rails does some dark magic behind the scenes to trivialise this. But what if you’re writing an app in Ruby, without the Rails to guide you?

Establishing a database connection in ActiveRecord without Rails is pretty basic:

Care about the Environment

The other magic in Rails is the environment selection. The main benefit with this is that we can have isolated connection configurations and have our Ruby app automatically select the correct settings for us (using our environment variable ENV).

Mind you, before this will work you first need to set the environment variable:

Now, depending on ENV[‘DB’], the code will open a connection to the corresponding database.

It’s never a good idea to store sensitive information (like database connection information and usernames and password of any kind) in your code base. Rails uses an external database configuration file called database.yml to solve this problem, so lets implement one ourselves.

Now we can set our environment variable same as before, but our code will look in a YAML file for the proper database configuration automatically, without having to store database connection information directly inside our code.

From time to time I’ve noticed people who struggle with cardinality and associations in Ruby on Rails. So, I thought I would attempt to create a cheat sheet here to help developers understand relationship cardinality and how it maps to associations.

ActiveRecord can be used to describe relations with one-to-one, one-to-many and many-to-many cardinality; where each model defines its relation to another. Let’s cover each of the three types of associations.

Use `has_one` in the base and `belongs_to` in the association:

A common question about a one-to-one association is ‘how to know which direction the has_one and belongs_to go?’  The correct way to know, is that whichever model has the foreign key, gets the `belongs_to`.  In this case, Home has the foreign key `family_id`.

One-to-one relationships are a bit odd, and as a general rule, if you find yourself using a lot of them, there is probably a better solution.

Use `has_many` in the base and `belongs_to` in the association:

This will be your most common relationship. As with one-to-one’s, the table with the foreign key gets the `belongs_to` (although this is a lot more obvious with a one-to-many). In this case the foreign key is `family_id`.

These can be a lot more complicated and there is actually a couple of different ways to do it.

The first way involves a specific joining model. This results in 2 stages of has_many associations. It is referred to as `has_many :through` and is primarily used if you need to fully control the joining model/table:

The second (and my preferred way) is to use the `has_and_belongs_to_many` method:

The main difference (or disadvantage) with the `has_and_belongs_to_many`method is that the intermediary joining table and foreign keys need to be exactly named to match what Rails expects. Which many-to-many method you use ultimately depends on whether you need to work with the relationship model as its own entity directly.

I recently wrote about the virtues of true UTF8 (utf8mb4) character sets in MySQL and how to change your database to use it. Today we will discuss a possible problem you may encounter when you do when programming on Ruby on Rails. The error looks something like this:

The problem exists because the utf8mb4 character set uses the full 4 bytes per character rather than the 1-3 of UTF8 (the character set most people mistakenly use thinking they’ll have full Unicode compliance). Because of this extra size, the schema_migration may no longer fit.

This small patch will set default mysql string column length to 191 instead of 255 which is the new index limit on utf8mb4 (aka real utf8).

One of the more common confusions with ActiveRecord associations is the difference between the `has_one` and `belongs_to` relationships.

So this is wrong:

If you need to add basic wiki style functionality to your Ruby on Rails models, there is a really easy way to get similar model versioning without having to resort to cutting the code yourself.

The acts_as_versioned ‘plugin’ has been available for quite some time, but its been made far better by it now becoming a gem instead of an old-school plugin. The authors have gone to considerable effort to make it as painless as possible to use.

This post, is designed to give you a brief over-view into how to get up and running with with models which ‘acts_as_versioned’.  Because its the current version (at time of posting) and because its awesome, this walk-though assumes that you are using Rails 3, not 2.  The instructions for Rails 2 sites are similar, but you’ll need to tweak this for it to work.

First, you need to grab the gem:

Next, add the dependency to the ‘Gemfile’, it doesn’t matter too much where it goes, I stuck it somewhere in the middle:

Next, just under the ‘ActiveRecord::Base’ line in the model’s class file, instruct the class that its to act as a versioned model.

Then, in the migration file you need to execute the model's method to create the version table.  This is key because the acts_as_versioned gem actually creates an additional database table to house all the previous versions of a given record.  Obviously, you need to delete the table is the schema is taken down.  My migration now looks like:

The key method is the

which creates the version table of the model. Now, get rake to create the database:

Thats it!  Its done.  Using acts_as_versioned is simple. I'll provide some examples, where '@article' represents an instance of a model setup 'acts_as_versioned'. To find the current version of an article you can use the version property:

But just performing a normal ActiveRecord lookup returns the most current version anyway, so to revert to a previous version use the revert_to method on an article instance:

You can save (just like you've done a hundred times before) a previous version as the current on by using the save method. The save on a reverted articles will just create a new version.

To get the number of versions:

Since '@article.versions' returns an array of versions, you can do neat things like this:

Obviously for this to work, you'd need to create a 'revert_to_version' action in the appropriate controller, but you get the idea.

acts_as_versioned is an amazing piece of work, and aside from the wiki-like functionality it gives you for very little effort, I can imagine scenarios such as audit and trace logs and "undo" features which could really benefit from this little gem.