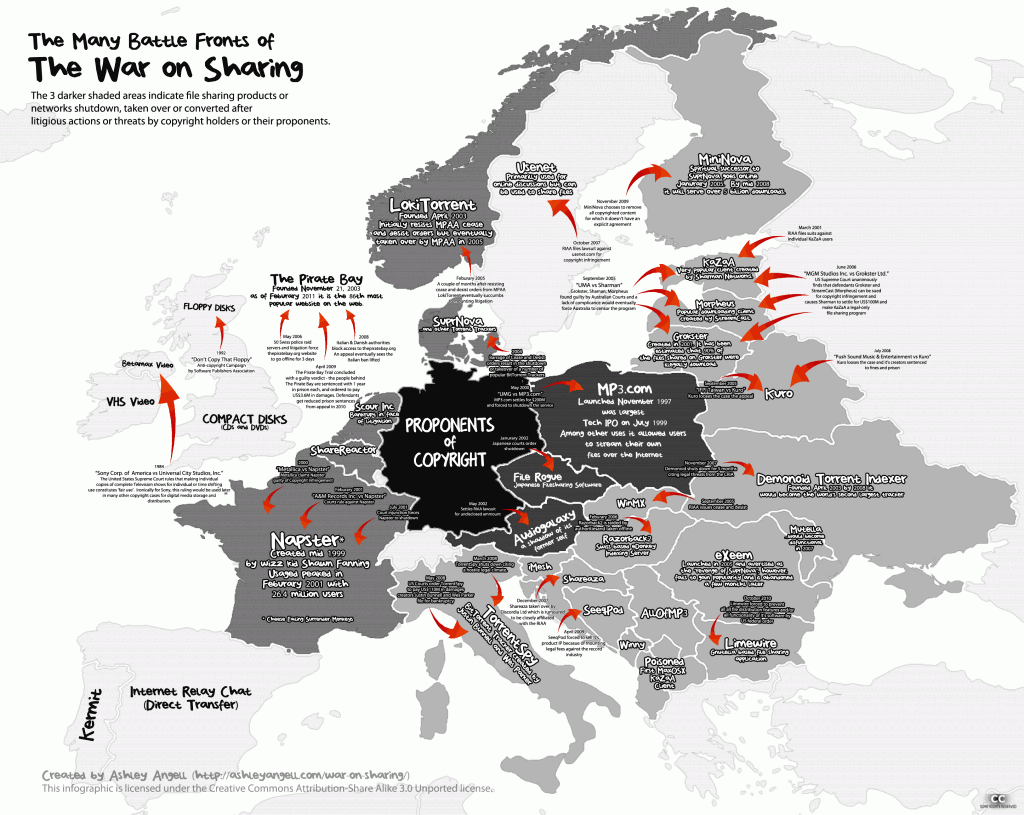 As media digitization and data distribution becomes easier, copyright holders are having to take increasingly aggressive steps to counter the growing number of people partaking in illegal file sharing and copyright theft. This proliferation of illegal file sharing has been responded to by the music, television and movie industries with a of mass of litigation against file sharers, websites and network operators which they view as facilitating or participating in copyright theft. Moya (2011) says that a unnamed researcher has told him that “right now, the total number of ‘J. Doe’ defendants sued in mass P2P suits since the beginning of 2010 is on the cusp of 100,000 (99,924), spanning 80 different cases”. This is in relation to a single decentralized file sharing technology called BitTorrent created by Bram Cohen in 2001. In February 2009 it was estimated that BitTorrent traffic accounted for roughly 27% to 55% of all Internet traffic in some countries (Schulze & Mochalski, 2009). The popularity of file sharing technologies such as the BitTorrent Protocol as a distribution protocol could be attributed to the systematic litigation and subsequent shutdown or failure of centralized peer-to-peer file sharing networks such as Napster, Morpheus and Kazaa.

Each of these networks presented a large single target of litigation and an easy way to enforce filters to prohibit copyrighted material on these networks or to eliminate the distribution channel entirely. The Motion Picture Association of America (MPAA) and Recording Industry Association of America (RIAA) are two organizations particularly infamous for their continuing and aggressive attacks on file sharing platforms, and their sometimes very public, relentless hunting and intimidation tactics over digital media consumers (Shaw & Mercer, 2005, 182). The modus operandi of of the RIAA and MPAA is to use stand-over and terror tactics on consumers it has identified as copyright infringers using provisions in the DMCA to subpoena the Internet Service Providers (ISP) of the alleged offenders, with the intention to sue them. Shaw & Mercer (2005, 182-183) describe the RIAA as regarding itself as a “key protector of music companies’ legal and business interests” and doesn’t bluff. Because of the tactics it employs, many people simply pay the redress and very few cases actually make it to trial. The RIAA alone, has issues several thousand infringement suites against people it considers to be violators. Gantz & Rochester (2005, 23) says that “by the numbers, most digital pirates are consumers” and that only a relatively few of violators actually profit off illegal downloading. This means that most of the people attacked by the RIAA are regular people simply enjoying media on their own terms. 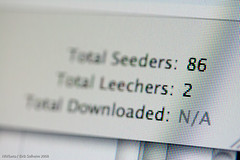 Television has come a long way since it’s mainstream popularity in a Post-World War 2 world. Today, the convergence of the Internet along with other digital innovations has, rather ironically, provided the same kind of industry wide, mass-disruption that Television caused Radio, all those years ago. However, where Television sought to replace Radio as the primary source of household entertainment, the Internet has instead empowered audiences to seek control over their entertainment habits; granting them the ability to consume media on their own and often unique terms. This ability to deeply personalize what traditionally used to be a static user experience has created a number of technological, social, ethical and commercial concerns, which will need to be addressed in the near future for Television to survive this most recent technological and social transition.

The most extraordinary shift in the disparity between old media and new consumption behaviors is due primarily because users have discovered new means of information access and how this information can be heavily personalized. Traditional broadcasted Television (old media) is a highly inflexible medium that can only be consumed in pre-packaged linear ways and it’s this content model which the entire Television industry has built is business models. Until recently, control over distribution channels was relatively easy, and this control gave commercial networks the power to monetize specific demographics. Primarily, the monetization strategies were structured around selling consumer attention (advertising to audiences).

Küng, Picard, & Towse state that “Once such content is available in digital format, it can be accessed through several devices, channels can be broken down into constituent parts, advertising can be avoided and programs can be consumed on demand, and in different locations, according to consumers’ individual preferences.” In other words, anyway, any place and anytime – something quite foreign to the established status quo of successful commercial Television networks. However, despite technological advances and changing audience behaviors over the past decade (favoring new and exciting content delivery mechanisms) the Television industry has been quite slow to find a place in this emerging new paradigm.

Increasingly, programs are utilizing the web, and specifically social networking (such as Twitter and Facebook), as a cost effective means to increase audience engagement. Websites, Video streaming (via catch-up services), blogs, and Social Networks can be easily created to catalyze an audience and create ‘lock-in’ which aide in stabilizing audience numbers and potentially even increasing them through word-of-mouth. Content lifespan can also be extended through convergence. Jeremiah Zinn from MTV Networks said recently at a VideoNuze event in New York, that “overlaying commentary and contests on TV reruns extends the life of that content and can make it relevant even during a second or third airing”. This clearly shows that old media is happy to converge with new technologies, provided that they don’t interfere with existing monetization and distribution strategies. New monetization opportunities are beginning to be explored, but so far the Industry seems lethargic to embrace them; possibly due the complex and sometimes delicate distribution deals currently existing between studios, producers, copyright-holders and Television networks around the world. The Film and Television Industries have learned from the music industry’s mistakes and the subsequent success of legal music download services, such as iTunes and are slowly embracing them, however, the burden of geography still handicaps many users from getting what they want, when they want it.

It is this “digital distance” that is fracturing the Industry. The effect that these arbitrary geographical rules imposed on different audiences is a primary driver behind the increasing quantity of pirated Television. Some popular TV episodes are getting up to as many as 5 million downloads per episode, a number that is rapidly approaching the total audience population for that same episode in the US. Ernesto Van Der Sar who created the Torrent Freak website said that after they analyzed some 400,000 torrents the “data indicated that approximately half of all the people using BitTorrent at any given point in time, were using it to download a TV-show”. This is supported by Michael Newman who stated that in 2008 the most popular episode of Lost was downloaded over 5.7 million times versus Neilson’s report of 13.4 million US viewers tuning in. The Industry is concerned that the increasing quantity of ‘bootlegged’ or otherwise unauthorized episodes downloaded online will only increase profit hemorrhaging, but there are also reports that the Industry has allegedly used these same illegal distribution networks as a marketing tool by deliberately leaking unaired pilots. One of the members of EZTV reportedly told Torrent Freak that it was his “understanding that many of the people that download TV shows from us are avid TV fans and will usually buy DVD boxsets of shows they like.”

Clearly, there is an argument to be made for Torrent downloading in actually helping Television in building stronger, deeper, more engaged audiences. Additionally, the Television Network NBC recently commented that they actually make less money on per-per-download services than they do on free download sites due to the advertising revenue gained from so many viewers, further justifying BitTorrent downloading as a viable distribution platform. Never-the-less, unauthorized downloading are publicized by traditional media as being theft, whilst many downloaders argue that if recording to PVR from freely broadcast media isn’t illegal, then neither should be Peer-to-peer (P2P). Proponents of Television downloading argue that P2P represents an opportunity, not a threat.

New media is something that the mainstream will soon expect from the Television Industry. New media is about breaking down the walled garden of traditional media and stripping away all geographical bias and enhancing the social relationship. People now see Television as an invested social experience; one to be shared discussed and participated in. The concept of Prime-time Television is starting to disintegrate and soon will be gone altogether, as audiences simply download or time-shift to the program they wish to watch at the time. Interestingly, only Reality Television and Special Events (e.g., Olympics, Sport Finals) are likely to avoid this trend and be watched live, partly because of the need audiences will have to share these experiences in real-time. This later trend has already converged into mainstream Television behavior, with people discussing live Television events as they watch, and some shows such as the Australian ABC’s Q & A and the American’s CNN which actually already incorporate a live audience Twitter feed into the regular broadcast.

The next generation will be the one to watch closely. They will be an entire generation who’ve not known Televisual media any other way, with an utterly transformed mode consumption and interpretation. A generation of Television viewers who don’t care which network a program comes from, only care that it’s right for them, at that moment, to be shared and discussed. They will expect to watch Television in a post-scarcity world and in contrast Television’s current status quo, expect Television to adapt it’s broadcasts to everyone’s own personal schedules. While the demands of unique personalization may take the Industry more time to adjust to audiences pulling them in every personal direction, once the Industry embraces new media we will again reach equilibrium. Despite the possible short-term struggles with the ethical, commercial and technological challenges, the future looks bright for all Television audiences because ultimately digitization allows new communicative, journalistic and content consumption which will force us to reformulate the existing paradigm.

This post is a slightly modified version of a piece I wrote for a University assignment for the Curtin University Subject Web Media: WEB207, answering the question: What are the Impacts of Digitization and Convergence on Television?